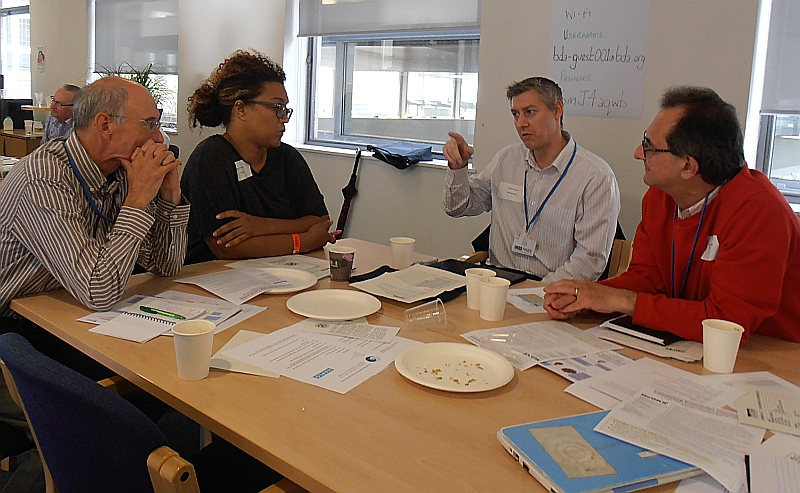 The aim of this meeting  was to bring together at least some of the UK communities concerned with knowledge and informatin management. These communities and organisations have different emphases, different modes of operation and even different approaches to membership. Some have regular meetings and a paid membership, while others are virtual and have no formal status or funds. Between these two extremes, there are many variants. In addition, different communities draw their members from different groups, both in terms of occupation and of industry.

NetIKX invited a range of such communities and organisations based in the UK, but mainly in London, to give short presentations on their genesis, membership and operation.

Communities that accepted this invitation and those who spoke on their behalf were:

Claire Parry spoke on behalf of NetIKX itself.

In addition, although not able to make a presentation at the meeting, David Gurteen and SLA Europe (the European Chapter of the Special Libraries Association) indicated that they were happy to support and be associated with the event. LIKE (London Information and Knowledge Exchange), CILIP and TFPL Connect-Ed also expressed interest in this initiative.

Each speaker described (in different ways) how their organisation came into being, how it operates and who its members are. The presentations, including one on NetIKX itself, were divided into pairs, each  followed by the usual NetIKX syndicate session, within which there was discussion of individual experience of networking groups and whether there is scope for these groups to collaborate and, if so, how it might be done.

While not leading directly to any future cooperation, this meeting provided a basis upon which there could be future developments. In the mean time, all those who attended have a better idea of the organisations that meet the needs of the knowledge and information communities and how they operate.